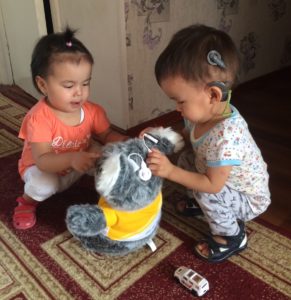 When a child of a family with siblings receives a CI, everybody involved normally tries to sensibly prepare the brothers and sisters of this fresh CI recipient to cope with the new situation to avoid being shy or having fears of contact when their brother or sister suddenly shows up with a to everybody visible strange device at their head called speech processor.
However, sometimes things develop differently and even then we offer help, but just differently as the following story tells.

Chyngyz from the Kyrgyz capital Bishkek is one of meanwhile 9 lucky Kyrgyz children who received a CI system through the help of Prof. Ernst Lehnhardt Foundation. Little Chyngyz who reached the age of two in May, has a twin sister Jyldyz and a five years old brother Alihan, both without hearing problems fortunately.
After the successful surgery which the Russian specialist Prof. Vladimir Fedoseev from Moscow performed on Chyngyz’ second birthday in May, both siblings saw their brother afterwards walking around with a large head bandage, and I am sure none of them was willing to swap with him.
When the speech processor was fitted 4 weeks later, however, and Chyngyz could proudly present it, both siblings unexpectedly showed big interest in the device.

Alihan was not sure anymore whether he could still hear properly or not and tried to convince his mother that he most probably might need such a device as well. Jyldyz however developed an intensive activity to take the speech process away from her twin brother by all means. At the beginning Chyngyz was pleased with the obvious attention, but finally was not amused anymore and when his mother told me about Jyldyz’ persistence I promised we will look for a solution.

I found support I was hoping for at the German branch of the company Cochlear in Hanover. They agreed to provide me with a soft toy. That sounded great. However, it was not just any kind of soft toy, but a Koala bear, which had ‘received’ a removable speech processor on each side. This solution was fantastic, and I was so happy that I forgot to ask the size of this fluffy CI recipient. I kindly asked to send Koala to Dr. Lehnhardt,, who, what a lucky coincidence, would shortly fly to Bishkek attending four more surgeries and supporting the gradually developing parents community of CI supplied children with help and advice.

Dr.Lehnhardt, of course, accepted to take the Koala bear with her on her journey, but informed me that it would not fit into her bag. It was too big. Oh, how big? Well, you can easily carry it in your arms! Oh, I see!
So, the President of Prof. Ernst Lehnhardt Foundation started her journey holding her fluffy companion in her arms until it took the seat next to her on the two sections of her flight enjoying even the lounge ambience during the stopover in Istanbul and was carried out of the aircraft in Bishkek obviously in good mood. 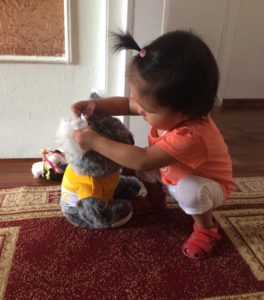 The world was back in balance.