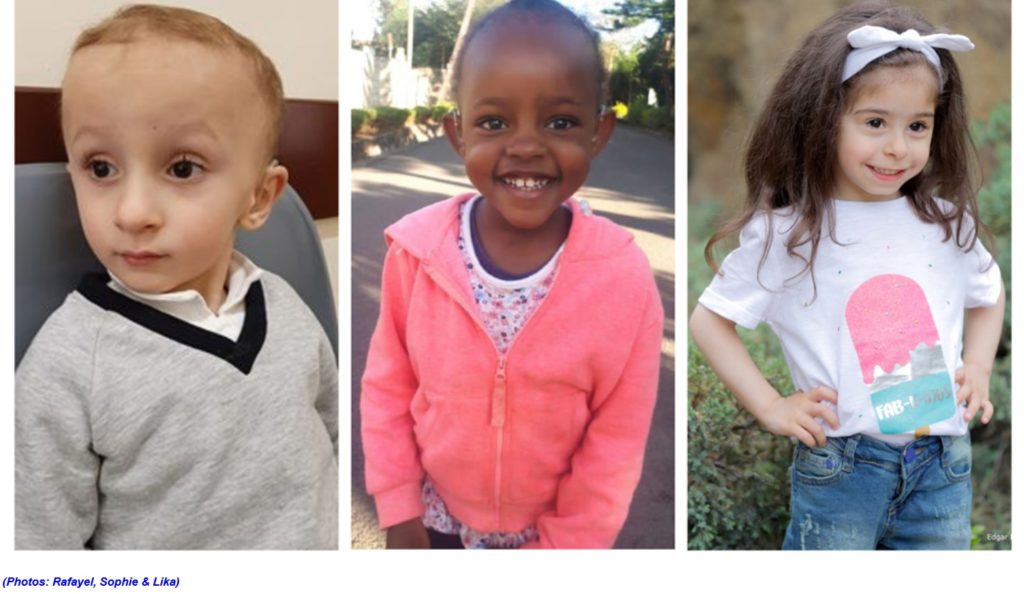 The Corona crisis is having a profound effect on all areas of life as we are all experiencing.

We at the Lehnhardt Foundation also had to learn that the otherwise not easy handling of charity projects for deaf children who are supposed to receive a hearing implant did not become easier during this time.  Moreover, if these affected children coming from non-European countries are to be provided with a CI system in Germany, the task becomes even more complex under these conditions.

Three children from two different countries and cultures, who are looked after by the Lehnhardt Foundation, were supplied with a hearing implant by Prof. Just, head of the ENT department, at the KMG Clinic in Güstrow, Mecklenburg-Western Pomerania, from mid-September to early November.

Rafayel, four years old, and Lika, five years old, both from Armenia, while four-year-old Sophie came from the Kenyan capital Nairobi.  Three little personalities, three different fates, but with the common goal of finally being able to hear and learn to speak.

Rafayel
Getting Rafayel and his parents to Germany initially was not easy.  Although the issuing of the required visas was relatively quick under the circumstances, flight booking was not easy at all due to the constantly changing travel regulations, which required quick action as soon as the flight restrictions were temporarily lifted.  At the same time, this uncertainty had an impact on the organization of the planned surgery.  In addition, there was a negative Covid 19 test required in Yerevan 48 hours before departure and an equally negative test upon arrival in Berlin, which then required a subsequent five-day quarantine before a third test at the clinic decided whether the patient would be allowed to enter the clinic with a parent so that the necessary preliminary examinations and the surgery could be carried out.  This procedure required additional effort, whereby the duration of the quarantine times and test results had to be constantly coordinated with the responsible health department.  Rafayel and his mother fortunately passed all three tests with negative results and on September 29, 2020, Rafayel was successfully supplied with a CI system.  The first fitting of the speech processor a few days later also confirmed the success, and the young family was able to start their journey home overjoyed by the result just in time before their visas expired.

Sophie
Sophie’s trip with her mother from Nairobi was more difficult to organize.  The burden of the many corona patients in Nairobi made it much more difficult to obtain the necessary documents for issuing visas.  Safety requirements by the Kenyan authorities and engagement of the specialists involved in the diagnostics proved to be clear hurdles, as did the strict requirements of the German embassy.  There were also uncertain flight plans there, which made precise planning impossible both in Nairobi and in the hospital in Güstrow.  When Sophie and her mother finally arrived in Germany, both of them went through the health safety tests and passed the quarantine periods as well.  The clinic reacted very flexibly thanks to the experience with Rafayel.  Fortunately, all test results were negative as well, the surgery date and the other appointments were coordinated accordingly and on October 6th, 2020, Sophie was also successfully supplied with a CI system.  When the first fitting took place a week later and Sophie heard her mother’s voice for the very first time, all obstacles and problems were forgotten.

Lika
With the experience from these two projects, little Lika from Armenia should actually be provided with a CI system as the third candidate without any problems.

However, it should turn out differently, because in the third decisive Covid 19 test, which should decide the admission to the clinic, mother and daughter both tested positive.  The health department involved, thereupon ordered 14 days of quarantine for both of them and the entire surgery plan was canceled.  Now the close cooperation with the authority and the observation of all those involved began, how the health of Lika and her mother was developing.  An intermediate test showed that Lika now had a negative result, but the mother remained positive.  That meant that Lika could be accepted, but her mother could not accompany her into the clinic, an additional stress for the girl and her mother.  In addition, the time ran against the approved duration of the visa.

Finally, Mrs. Abrahamyan, the representative of the Lehnhardt Foundation in Armenia who had traveled with them, agreed to accompany little Lika to the operation as the closest confidante.  This made it possible to successfully carry out the supply with the system during the approved length of stay and also to carry out the first fitting on November 2, 2020, just one day before the return journey.  Everyone was understandably very relieved that in the end everything went well and Lika was able to start her long-awaited journey into the world of hearing and speaking

These three cases make the additional burdens in this crisis clear and show the special requirements for flexibility and good will of all those involved, so that in the end, regardless of all adversities, these deaf children could find the way out of the silence into the colorful variety of sounds.

And we all agreed that the efforts were worth it.

Klaus Gollnick
Board member of the Lehnhardt Foundation