I was invited to represent EURO-CIU during this workshop in Moscow on October 16 – 17, 2018. Please see my report. 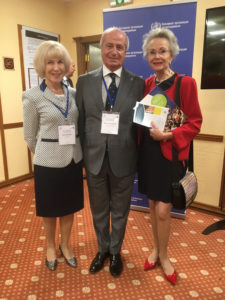 (Photo: Prof. Maria Boboshko, Prof. George Tavartkiladze and Dr Monika Lehnhardt)
Moscow, Russian Federation, October 16 – 17, 2018
This meeting was headed and managed by Dr. Shelly Chadha, assisted by Karen Reyes, Prof. Dr. George Tavartkiladze and Dr. Vigen Bakhshinyan.
More than 30 participants (attendance was fluctuating) came from 17 countries (10! from Russia, 3 from Georgia, 2 from Armenia, Kazakhstan, Ukraine and UK, and 1 from Belarus, Germany for EURO-CIU, Kyrgyzstan, Latvia, Moldova, Poland, Romania, Slovakia, Tadzhikistan, Turkmenistan, Uzbekistan).
Following welcome speeches from representatives of the WHO, Russian Ministry of Health, Russian Society of the Deaf and the National Research Center for Audiology and Hearing Rehabilitation, Dr. Shelly Chadha presented about “Ear and hearing care: global perspective”.
She highlighted the cost of unaddressed hearing loss worldwide with 750 billion US$ p.a.  A new project with a budget of 1 million Euro was initiated to improve worldwide health coverage.  2017 a new resolution was signed based on the request from the Russian Federation in 2015 and ear and hearing care came into focus.  The goal is that this will be accessible for all.
World Hearing Forum has been established and is open for applications to become a member.  The importance of Hearing Loss is obvious as 1/3 of people aged between 50 and 60 and 70% of people aged over 70 suffer from a significant hearing loss.  Currently there are 466 Million people with a disabling hearing loss, out of these 36 Million children.  Statistics estimate that in 2050 1 out of 50 will have a HL.
WHO has 194 member countries and there are annual gatherings.  Strategic areas for 2017 – 2021 are the creation of evidence-based data and the World Report on Hearing is to be launched on 3rd of March 2020.  The World Hearing Day is March 3 every year.
Dr. Chadha presented a series of toolkits that are available to provide technical support, organize workshops with stakeholders, develop training programmes, provide online support.  “Think global and act local” is the motto.  Mahatma Ghandi “Be the change that you want to see in the world!”
Dr. Manfred Huber, WHO representative in Russia presented the regional perspective of ear and hearing care.  He talked about 330 million ear infections that are preventable.  Occupational HL is the 2nd most common, protection is badly needed.  Recreational is another important factor.  Young people listening to music at a far too loud level.
In Europe, 11 – 19% of the population suffers from hearing impairment.  The most important factors are age and noise.  The impact of HL is dramatic, affecting productivity resulting in lower wages, exclusion from society, isolation and early cognitive decline.  HL can be cost-effectively addressed by:
Make a Sound Investment!
Prof. Nicolai Daikhes (Ministry of Health of the Russian Federation) described the “State of audiological services in the Russian Federation” and painted a very positive picture: neonatal hearing screening is working, everybody in need gets a hearing aid and this applies also to candidates for cochlear implants.  Why the number of CI purchased by the government has been reduced from more than 1.000 to about 600 and why this is sufficient for a population of 148 Million people was not explained.  He praised the Chinese cochlear implant as equivalent in quality to the others from the four major manufacturers.  In fact, this is a copy of one model produced by the Australian company Cochlear some 15 years ago.
Country presentations showed the huge differences in the level and quality of ear and hearing care in this region.  Key issues seem to be in:
On the second day Dr. Shelly Chadha presented the wide range of WHO tools for Ear and Hearing Care and Dr. Karen Reyes presented the Resources for safe listening.  The importance of noise as a key factor for hearing impairment was clearly highlighted as well as the ways how to prevent it.
Dr. Sue Archbold presented on Spend2Save (see separate report in the EURO-CIU Newsletter).
The Role of civil society groups in EHC was emphasized in a comprehensive presentation by Darja Pajk (from Slovenia and presented for the European Federation of Hard of Hearing).
Ekaterine Tortladze (from Georgia presenting the foundation “Aures”) talked about Advocacy using the World Hearing Day and described the engaged efforts in her country to improve the situation in EHC.

At the end of both days there were group workshops, focussing on the identification of regional priorities and actions to be taken.  The results were given in writing to the Dr. Chadha and Dr. Reyes and will be made accessible.
Monika Lehnhardt-Goriany represented EURO-CIU.  She actively participated in discussions and highlighted the activities of EURO-CIU.  She emphasized the importance of collecting comprehensive information about the current situation in EHC in all countries and of sharing this.  Based on sound information and good arguments, discussions and negotiations with governmental bodies and stakeholders can be initiated, which should result in making progress.
She also highlighted the importance of training for professionals, especially in countries where there is a lack of experienced experts.  The only promising way of spreading knowledge effectively is by using modern media, i.e. the Internet. Online learning is the way to go!
She said, that parents are our most important allies when it comes to lobbying and we need to empower them.  This again can only be done effectively by using the Internet.  Counselling of parents and encouraging them to establish parents’ associations or foundations is one of the most promising methods to improve EHC worldwide.
Monika Lehnhardt-Goriany suggests to open EURO-CIU to non-EU and non-European countries, provided there is a strong local CI user or parents group.  In concrete “AURES” from Georgia, “Melody of Life” and “I hear you” from Russia should be invited to participate in the next EURO-CIU meeting in Wroclaw in April 2019 and be given a chance to present themselves and apply for membership.
Monika Lehnhardt-Goriany